K has a fascination with doctors & playing doctor which is pretty funny seeing as she is a little unsure about going sometimes. We try to treat most minor problems naturally at home & she is healthy so doesn't have to go to a doctor often - just the odd check up which now amount to only 2 or 3  per year.  She has been to the dentist more often lately though & thinks he is the coolest guy she knows! I do have to insert a little brag here. Last month she had a routine blood draw & although she was a little nervous, she did great they managed to draw enough blood on the first try!  She has always been tough to get blood from & usually it involves a couple hours of waiting & 2 tries before eventually dragging the wonderful doctor who used to work in a NICU out of his crowded waiting room to do it.

Anyways, K loves all things doctor & has for a while - check out this post for some cute pics of her practicing CPR.  Last week she found her older sister JC's manual from a recent first aid course & reads it & looks at the pics every chance she gets.  It is her most read book of the week with only the Sears Wish book coming in at a close behind.

K was given this first aid kit & was thrilled from the moment she saw it.   Of course she had to be the doctor so she dressed up in her housecoat & told me that "The doctor would be with me in a moment. "  She cracks me up!  Where does she get this stuff from? 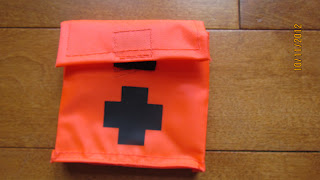 She then proceeded to empty out & inspect everything inside. 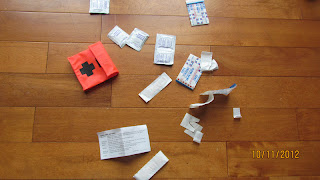 Then she went in search of a patient. 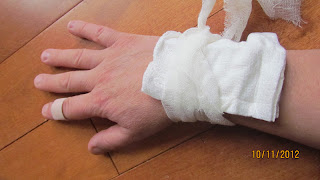 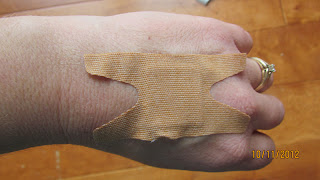 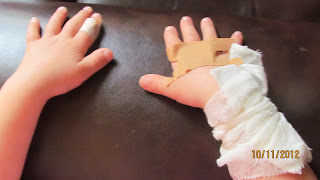 Next it was her turn.

Afterwards when I had to go make supper & she decided to fix her dolls.  She was so comforting to her patients &  I had to giggle when she told them "Come back again if you don't feel better soon".
Posted by Laura at 10:31 PM

Email ThisBlogThis!Share to TwitterShare to FacebookShare to Pinterest
Labels: 31 for 21, Down syndrome, Down Syndrome Awareness, health, trisomy 21