Today is World Down syndrome day.  It is a day when people try to raise awareness about trisomy 21.

Last week our family went skiing in the mountains.  While K & I were waiting in line to buy a lift pass the lady standing next to us asked me a question that I hear often.

I am often asked this.  The people inquiring recognize her extra chromosome.  I'm sure they are genuinely kind & well meaning.  I know that they look at my sweet K & think she's adorable & just want to start a conversation. What bothers me is that it is very rare that they ask the question of K herself.  My daughter is judged on her ability to have that conversation before she has even opened up her mouth to speak.  If she had 46 chromosomes would virtually everyone address that question to me?  I don't think so.  My other kids got asked this same question & proudly answered  while holding up the appropriate number of fingers

"K, this lady would like to know how old you are."

As always K proudly held up 5 fingers & announced " I'm five."  ......................& as always, the conversation continued.  As we waited for our turn they talked about skiing, school & lots of other things that five year old girls enjoy. I hope she was able to change that lady's perspective that day.

Later that day as K negotiated a curve on the ski hill bundled up with her face obscured by her balaclava & helmet, a snowboarder went by & called out "Great skiing!" to which K responded with a thumbs up.  Later, a ski patroler passed us on the hill & applauded her efforts & told her she was doing a great job.  With her face covered, neither had any idea that K has trisomy 21. They spoke to her, not to me, but to K herself.

This is just a small example of how K is sometimes treated differently because she has trisomy 21.  While no one is intentionally trying to segregate K, that is what is happening.

There is a man with Down syndrome living here in Canada who did a neurodevelopmental program just like we are doing with K.  He excelled in school & went on the college where he graduated with his typical peers in his field of choice.  He can't get a job.  He even successfully completed an internship but although he did well he has not been able to get a job in his field of choice. It is assumed that he can't do the job well because he has trisomy 21 so time after time he is passed over.


Amongst our local community of family & friends K is treated just like the other kids & I am glad for that. I think my little girl is changing a lot of the perceptions about trisomy 21 locally & I am thrilled but it needs to happen on a larger scale.

Awareness is important but I wonder if there isn't a better way to go about it.  If people with Down syndrome were treated with fairly & with the respect that they deserve then would we need to have awareness campaigns?

One national Down syndrome organization announced that they were celebrating World Down syndrome day by wearing "odd socks".Thankfully they have changed that to Lots of socks which is an improvement but is that really they message that we want to be sending? Really, what message are they sending?  I haven't quite figured that out yet.

The other thing that crosses my mind often is that the other half of the problem is that most parents of children with trisomy 21 probably aren't even aware that we don't have to "wait for our kids to accomplish milestones in their own time".  There are things that can be done.  The progress my daughter has made due to her neurodevelopmental program is phenomenal! I know of other kids who are seeing fabulous results through a targeted nutritional intervention.  This information that needs to be shared! We need to create awareness of the possibilities for our kids with trisomy 21.

Right now, life is sometimes overwhelming with K's intensive neurodevelopmental program, farm life, my part time business & our older girls sports activities.  Besides my blog & the Unlimited Potential forum I don't have much extra time to devote to this so for the time being a lot of my advocacy work will  be done like I described above.  Eventually I hope to have more time to devote to this but for now, one person at a time I will let my daughter speak for herself.

The International Down Syndrome Coalition has created a video for World Down Syndrome day. The theme is "I Am". I chose today not to do an "I am" post created for K but if we ever meet in person I will allow her the oportunity to tell you for herself:

I am so Proud of this Kid!

K's skiing has come so far this year.

K skied a long green run in the mountains today.  So long bunny hill!  K rode the chairlift up to mid mountain today! I did use a harness but  honestly it was for my benefit, not hers.  Remember this post? I have however quit using the harness on the bunny hill......................even when she goes on the bumps at one hill we've been to recently. 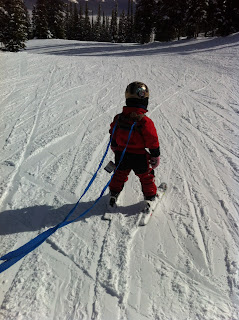 This video is from yesterday skiing around some cones at our local ski hill.