Time for a Big Girl Bed?

We have put off moving K out of her crib for a long, long, time.  We have a cute little toddler bed that an older sister used, but just haven't got around to setting it up until now.  She hasn't tried to climb out, so it was just easier to leave her there - no wandering at night, no getting out of bed, etc.  Now, don't get me wrong - K is a climber.  I think the only thing she hasn't climbed on is her bed, however, she is very rarely in her bed when she is awake, so just doesn't have the opportunity to climb out.  She literally falls asleep within minutes of being put to bed at night & often within seconds.  Every morning for the last few years now, she wakes up in the morning & calls "Mommy"  & every morning, Daddy goes & gets her right away - isn't he sweet?  lol We cuddle for 1/2 hour before getting up for the day.  Last week though, something happened to make me think it is time.  K almost managed to climb back into her crib.   The only  thing that stopped her was a noisy sister whose distraction made her go on to new & exciting things.  If she is able to climb into her crib from the outside, it only makes sense that it won't be long before she decides to climb out of it, so my husband set up the toddler bed. K was so excited about having a jungle animal bed! 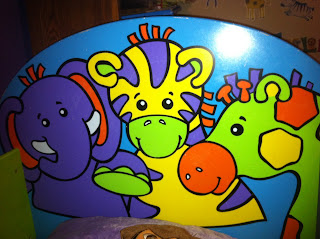 I was out for the evening at an event with my oldest daughter, so K was sleeping when I arrived home.  My husband had texted me earlier that evening to tell me that she was still thrilled about sleeping in her "Big Girl Bed" & was out like a light in less than a minute.  When I saw this peaceful scene, I thought "wonderful"  she is doing so well, but when I reported the news to my husband,  he said she'd landed on the floor twice already, He had put blankets around the side of the bed so she would have something soft to land on if she fell out - Great! 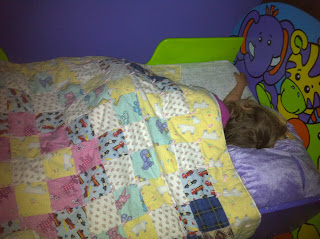 15 minutes later I heard a funny noise & found this: 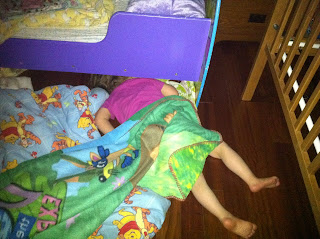 Another 15 minutes later & here she is: 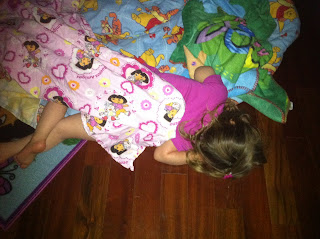 Nighty night sweetheart - back to your old bed! 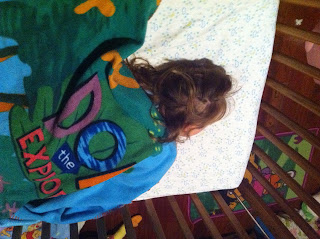