Last week, was my daughter's first visit with her new OT.  K gets PT & OT at the same time, so the PT that she has seen since she was 3 weeks old was there also.  The OT was trying to get an idea on where K was with her fine motor skills, and the PT explained that K is doing very well - actually she had always been at age level or even a little ahead in fine motor skills.  The OT produced this puzzle as her first activity: 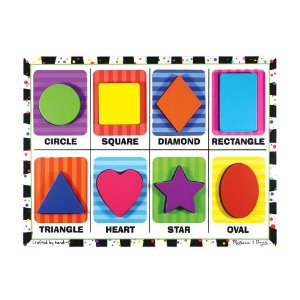 K not only is very adept at this type of puzzle, but she kows all of these shapes & more.  She took the first puzzle piece & clumsily tried to stuff the star in to the square shape.  Slowly with a lot of help from the PT, she managed to finish the puzzle. The PT & I watched in amazement!
Next they stacked blocks. K placed the first block, then set the 2nd block precariously to one side of the first.  She continued this for several attempts, never managing to stack more than 3 blocks at a time.  Her delight in playing with the OT became more evident to the PT & myself as time went on! I think the OT was really beginning to doubt the PT and I when suddenly K decided to do a complete 180 and show off - what a little stinker!  She then stacked all of the blocks  perfectly before crashing them down - there were more than a dozen of them! 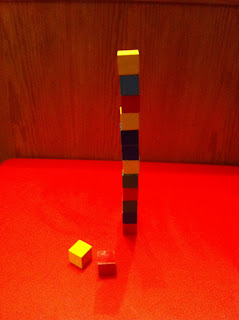 Next it was time to cut a piece of paper.  K's ND is not recommending any cutting activities for her at this time, so we have not been practising at all.  K picked up the scissors and was easily able to cut the paper in half. The OT then got out a piece of paper with a line on it and K cut straight down the line. Even I was suprised that she could cut like that with no practice!
There's never a dull moment!
Posted by Laura at 11:24 PM