Here are some more questions from a reader .  My replies are in purple.

Hi,
I stumbled on your blog a few days ago, which is immensely helpful, and am hoping you can answer some questions for me.
My child is 24 months old and is speaking about 15-20 words, so working on speech is a priority for us.
I am wondering a couple of things:
- when did your DD begin to speak single words?

She was about 7 months when she spoke her first word, & if I remember right, she had about 8 or 10 by one year - I wrote it down, but I forgot where - oops.
.
- was she reading before she was speaking? if so, how did you know that she could read - did u test for actions or something?
I'm sure she was, but I feel very strongly that testing should be done very rarely, if at all.  I did test briefly, on one occasion when K was about 15 months & was certain then that she was reading some words.  We really didn't test again until she was about 2 & started voluntarily saying words out loud. It was really only in about January that we started consistently getting her to read books for us each day. Until that time, we waited until she was in the right mood to read to us.  I think it is much more important to make sure it is a good experience & that the child does not feel pressured than to have to know how they are doing.  It can be a very frustrating leap of faith, but a lifelong love of learning & reading is much more important. If I was going to try to test, I'd be sneaky & teach action words & model the action, hoping for a response.
-- what things did you think were most helpful for getting her to speak more words?
Probably the most important thing  wasn't anything I did! K is the youngest of 4 daughters & she hears a lot of talking from all of the family.  My next oldest daughter KJ, is a "gifted talker", & K has been known to say "KJ, please stop talking." lol!
Some things that we did that I think helped were:
- talking to her a lot & explain things to her - we talked about just about everything even as a very tiny infant.  We talked about sounds we heard, we described what we were doing when changing or dressing her, we talked about colours, body parts, familiar objects, foods, you name it - even very uncommon subjects.  For example, last summer just after she turned 4, we  had a conversation about some irrigation equipment we saw on the side of the road.
- to give her lots of time to respond to us verbally.  Even when she was too young to speak, we would listen very patiently for her to make some sort of noise & have a conversation.
Google Dr. James McDonald's site - his Communicating Partners method is wonderful. He also has an active Yahoo group you can join.
Longvida curcumin & fish oil are two supplements to research that can be helpful for speech.
- i have been doing Glenn Doman's sight words program with physical word cards (only the words - no pictures) for a few months now, and just saw the post on Little Reader. I am curious about why you stuck with the physical cards only for a while, and at what point you transitioned to the Little Reader program itself?

We actually stayed with physical word cards for a very long time.  Until K was about 3.5 years, she would not even look at a flashcard that did not have a picture on the other side!  From age 3.5 to 4, we started to do more word only cards, & only in the last 6 months have we transitioned right over to Little Reader.  We will still rarely do cards, but not often.  We still do home made, laminated books occasionally, but more often to help teach or prepare K for things like her recent trip to the dentist, which, thanks to all the  preparation with her personalized "My Visit to the Dentist" book, went very well.  The biggest reason we switched is that she was getting to the point that she was sounding words out & had so many sight words that her vocabulary was tested at age 4.5 at a 4th grade level.  I felt that it was better to just stick with longer sentences on Little Reader or getting her to read us stories. Even on Little Reader, besides finishing up a series of phonics files, most of what I pick to show her is more geography, science & French words because we are starting to focus more on learning a 2nd language. 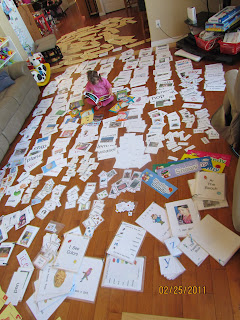 This is a picture of many of our flashcards - those are bundles
of cards, not just individual cards - we have thousands!

- on Little Reader, do u do all the methods each day - flash cards, multisensory and picture flash cards?
- when did you start Little Math?

When we got the Little Reader program, it was just in it's initial beta testing stage.  The didn't have the semesters yet, so we just made our own play lists.  By the time the semesters were finished, K was too far along in her reading, so I just used some of their files & still created my own play lists &  more & more I find that I need to create my own files to keep her challenged  & entertained

We have puttered with Little Math off & on, but didn't officially get the full program until last summer.  It just seemed like I had too many things going on & didn't really focus on Math.  We also did the Doman red dot cards when K was little, but again, I wasn't real consistent.  Doman dots & Little Math are meant to be done with very little kids - under age 2 for typical kids.  We have & do still use Little Math, but have now gone to a program called Math N' More which was recommended by K's neurodevelopmentalist.  We have been consistently doing 1 or 2 pages a day since about October of last year along with some other math activities & it is going very well.


I recognize you are probably superbusy but would be most grateful for any light you can shed to help me out.
THank you,

The other thing I would like to add is that it is really important to use pictures to help teach comprehension.  I think it is easier to teach to word meaning & develop comprehension at the same time rather than have a child that can parrot back words but doesn't understand what they are reading. Because K insisted on having the pictures too, we accidentally helped her to have really good comprehension of what she reads. She reads directions all the time - it is her job to read directions in her math book & follow through & she does a great job of it.