I've talked before on my blog about the fact that we try to eat healthfully.  One of the ways in which we do that is to grow our own garden.  Now, as any good Canadian gardener knows, carrots taste better if you leave them in the garden until there have been 1 or 2 good frosts.  The downside to that?  It could mean there's snow to follow soon.  Usually I have enough time to get my carrots in & usually I figure the snow won't come to stay until after Halloween.  Unfortunately this week it came about 2 weeks before.....................& on a week where I was home for about 2/3 of a day in between the 3 day high school camping trip & the volleyball tournament that involved a hotel stay - not a good carrot picking week.  I kept waiting for the snow to melt but as it continued to snow & settle in for a long winter I decided that I better toughen up & head out to pick carrots.  At least the snow has sunk down to 3 or 4 inches from over a foot a week ago. 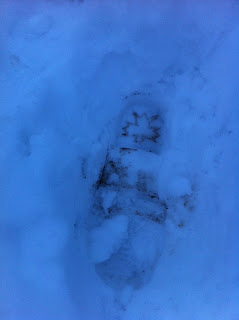 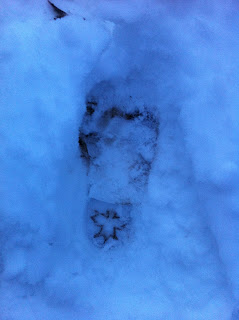 A shovel to scoop off the bulk of the snow. 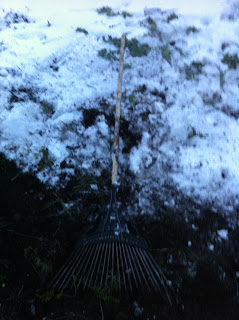 A rake to scrape back the next layer of snow 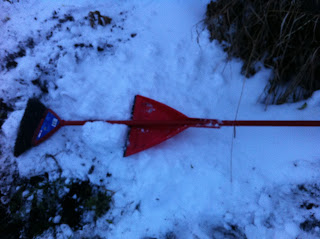 and a broom to sweep away the last bits of snow 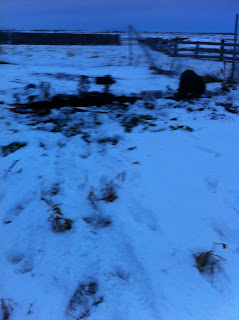 It was the most challenging carrot picking day we've ever had but at least it was a productive day! 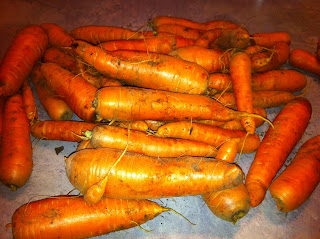 As you can see from some of the above pictures, it was almost dusk as we were picking the carrots.  Earlier that day we went to our local ski swap.  We sold a few skis that we didn't need, everyone found a volunteer job, we visited with friends, some of whom we hadn't seen since last season & best of all, K hit the jackpot - New Skis! 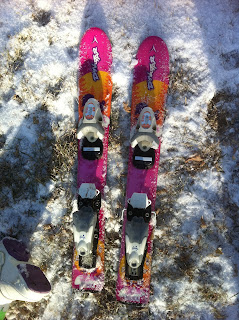 K's been using the same pair of skis for the last couple of years & they were just too small. K wasn't sure she wanted to give up her beloved flashy pink & orange skis but was talked into it when she saw how cute the new ones are. 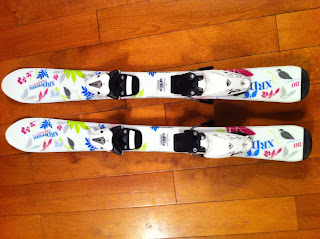 We've planned a couple of ski days in the mountains with friends in early December before our ski hill opens & K is chomping at the bit to try them out so I'll try to update then.  K was just starting to get the hang of turning last spring so I'm excited to see how she does this year.
Posted by Laura at 10:04 PM