I was reading a blog of another mom today, & on post was about how they had brought their slide inside so their daughter could get more use out of it.  I had to giggle as I read the post, because we did the exact same thing when K was young.  She has outgrown her slide now, so it usually sits outside for other little kids that come to play. 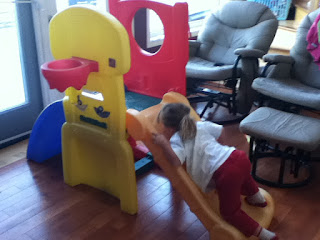 We have however, moved on to bigger & better things;)!  I donated some items to our local thrift store the other day & made the most exciting find!  It was a treasure that was marked at $15.00 mainly because they had no idea what it was - actually, they thought it was a playpen.  We have been using a set of outdoor monkey bars for brachiating practice this summer & have already purchased the materials to build a Doman style brachiation ladder.  When I saw this, I was thinking that maybe I could somehow take it apart to use for the ladder.  Once we put it together, those plans changed - it is too cool to destroy like that, so I will still be building the ladder.  Anyways, here is a pic of K playing on it. 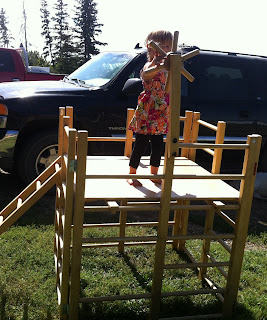 Isn't this awesome! This picture was taken outside the day that I bought it.  My oldest daughter helped me put it together & figure out that it was not a playpen, but actually a cool fort to climb all around & a platform to climb up to! It really is meant for indoor play & I was afraid that it would get ruined outside, so much to my husband's annoyance, it is sitting in the kitchen. I'll have to find it a permanent home somewhere in the house, but for now, K is loving her kitchen climbing fort!
Posted by Laura at 3:15 PM