Wow! What a difference!

About 6 years or so ago when I was looking into neurodevelopmental programs & still in the stage of trying to decide if this was a path I wanted our family to follow, there was a forum called Child Brain.  I spent quite a bit of time of that forum reading (not actually typing anything because I was too "online shy" at the time) & checking out past posts.  I am forever grateful for those moms & dads on Child Brain because they were my first chance to see what a neurodevelopmental program was really like.  They shared the good & the bad, the challenges along with the frustrations. They gave me a real picture of what life on program was like.  Unfortunately the site crashed a couple of years later. It was months before they were finally able to get it online again, no one seemed to find their way back & the site was soon shut down permanently.


One important theme that I read over & over on this site was how important the physical component of a neurodevelopmental program is. The wise moms on Child Brain always insisted physical activities like creeping, crawling & brachiating was more important than the academics, so if you could only get part of your program done, try to give the physical stuff priority. If you don't help the child's brain to become more organized then the academics just aren't going to sink in.

This spring due to some confusion scheduling the appointment (probably my fault) K did not end up having her regular neurodevelopmental evaluation so I created my own program for her. I included math, reading, speech (sentences structure as well as we are working on the TH sound), auditory & visual processing, thinking skills, handwriting & a bit of sensory stuff. The biggest change that I made was that I really ramped up the physical activities, namely creeping, crawling & brachiating.

The interesting thing is that I just talked to K's neurodevelopmentalist yesterday after implementing this program for several weeks & she said that they are also starting to add more physical activities to their programs. K's next evaluation is in early September & there will likely be a lot more physical activity on it. I'm so glad to hear that my instincts are correct.

It has been only a few weeks & already I'm seeing changes.  The biggest change has been in K's handwriting.  It is much more legible than it was a few months earlier.

She also seems stronger with her digit spans & her upper body strength has definitely improved as well! I'm so glad we tried a back to basics approach.


Now for the really amazing part!

I have been noticing lately that KJ,  my 10 year old doesn't have a very coordinated crawl . I talked her into joining us in creeping, crawling & brachiating this summer. shhhhhh..................don't tell her friends that part of the story ;)

Anyways, we didn't see a huge change over the summer.  The only thing I really noticed was that by the end of the summer her reading interests had changed & she suddenly became a voracious reader like my other 3 girls. It was never a fight to get her to read but she just never seemed to have the same passion they did - she would often read comic books & graphic novels.  Suddenly I realized that she was reading everything & anything including a book my 14 yo just read last year!  I wondered if all that physical program could have had an effect but reasoned that it could also just be a coincidence.

Fast forward to early September & I am amazed at the difference!  We did nothing that involved writing this summer so I as unaware until school started however K's handwriting has improved greatly!  According to K, last year her teacher had to constantly remind her to write neatly so she could read it.  She also made a number of letter reversals which made her writing hard to understand.  This year her teacher keeps saying "Wow! you're writing is beautiful!"  She is also finding spelling tests much easier as well as social studies.  I wonder if the latter 2 could just be because she is so excited about the improvement that she is working harder however there is no disputing the handwriting - last spring even when trying her absolute hardest she could not write as neatly as she is doing today when not giving much effort.

Since last year I have been having KJ write out her spelling words on flashcards to teach to K. Here are examples of last spring's writing compared to now: 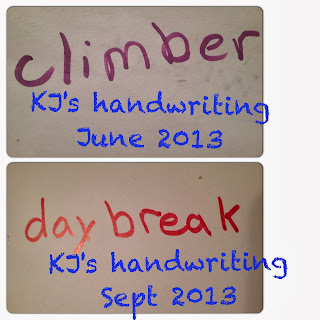 & a couple more examples - these are pretty average, not even the messier ones!