This morning I heard a telltale bump on the window of my front door.  I glanced around outside & indeed a bird had hit the window.  What did surprise me was that this unexpected visitor was an owl.  We do have various breeds of owls in this area but I've only had smaller birds hit the windows before.  He was obviously alive but a little stunned & would have been fair game for one of our farm cats so I picked him up & took him into the house.  K & I were the only ones home so I told her where to find my iPhone & she snapped a couple of good pictures for me.  The owl seemed to be recovering quickly so I soon released him onto my deck.  He fumbled as he tried to fly away but after a couple of attempts he soared off across the yard & landed in the tree by the barn.


According to a Facebook friend it is a Boreal owl. 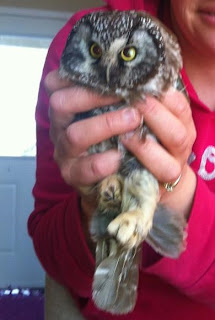