I have posted about Longvida Curcumin (LC) before, but I think it is time for an update - I love this stuff!  The last time that I ordered, I purchased 3 bottles to be sure that I did not run out.  I must have put the 2nd two bottles away very carefully, because I still can't find them. Grrrrrrrrrr...............  I kept thinking they would show up, so I put off ordering more.  Finally, a few weeks ago, I gave up & reordered.  K's speech, while still good for her age, was just not where I knew it could be.  She was struggling to find words at times & was not as clear as before.  K was still speaking in sentences just like before, it just didn't seem like speech was flowing as easily as it had been.  She was off of it for at least a couple of months.
K has been back on LC for a couple of weeks now & it is such a relief to here her speech flow easily again.  I had found myself getting frustrated (with myself) at my inability to understand her at times & realized today that her speech clarity has greatly improved. I started writing down some of the things she has said this morning.  These are just the first few quick examples that I wrote down, and she will often speak in longer sentences or say more complex things:
"Can I go to school too please?"
"You stand back & catch me."
"Mommy, you're hair is brown - Wow!"     ( I finally dyed my prematurely gray hair - it was after she went to bed.  It was so cute that she was so surprised that I had brown hair lol!
``Mommy, look, I dropped it, it fell.``
Don't ask me where she got this one from, but this morning while we were doing her BrillKids Little Math program, one of the icons was obviously not grown up enough so K said "This is for babies!" ..........can you tell she has big sisters? lol
Most of the time K can be understood by anyone, when she can't, it is often because she is speaking too quickly.  She talks well enough that since she was about 3.5, we have been allowing her to order her own meal & drink at a restaurant.
I have read that LC is not recommended for kids under one year due to possible gastrointestinal issues, but  like everything, you should research LC for yourself to be sure it is appropriate for your child.
I buy the powder because K is too young to swallow capsules.  Many people just open the capsules, but they are packed so tightly that I found it quite difficult to do.  The risk to buying the powder is that is can spill more easily, but it is well worth the risk to me if I don`t have to fight with those pesky capsules!
K has been off of LC a couple of times since we started last winter. Each time we have put her back on it, we have seen definite changes within a week.  Even my older girls, who had no idea what this supplement was about, all commented on how much better she start to speak.
It is recommended that LC be given in the evening, however my daughter will be up half the night if I were to do that, so we give it in the morning.  My understanding is that this is not an uncommon reaction.
For more information on LC, here is a link to the website that I buy it from: NuTriVene
Here is a link to all of the posts labelled Longvida on Qadoshyah Fish on her blog Got Down Syndrome: Got Down Syndrome
Here is a link to a very informative post written by Andi Durkin of Down Syndrome: a Day to Day Guide: Andi's blog on Longvida Curcumin 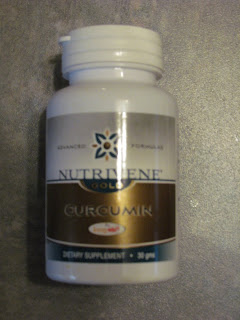