There's never a dull moment!  Tonight, my older 2 girls played their last regular season basketball game.  That in itself is a story as they are the smallest school in the division &  even with every Jr. High girl playing, there are only a couple of extra players on the bench. It makes for a long game when their aren't enough nearly enough girls to fill 2 lines,but wow are these girls in good shape!  In spite of having a very small school, we are fortunate that every one of the girls plays & we are thankful that this allows us to have a team.  In spite of this, their grit, determination & the fact that all of the girls really work as a team, has allowed them to be ranked number one as we head into the playoffs! Now, with feisty & determined big sisters like that you can see where K gets her spirit from!

Usually K is really good about staying on the side of the court during a game & I can't even remember the last time that she tried to wander onto the court.  Tonight however, she wanted to play basketball!  I reminded her that "no, you are not allowed to play" & she seemed resigned to sit on the sidelines.  After the girls were done playing, we stayed to watch the boys.  At one point K decided to rummage through her big sister's backpack & found her game jersey which she immediately decided she should wear.

They had just blown the whistle to stop the play in the game that was going on, and as soon as the whistle blew to start it again, the smallest player on the sidelines streaked across the court & was right in the middle of the action under the basketball net before I had any idea what was going on.  Thankfully, they blew the whistle once again before those big boys accidently ran her over & within seconds, her big sister T had retrieved her from the court & once again she sat on the sidelines, but not without a lecture first on who was allowed to play basketball!  I did get a bit of an argument from K because she insisted that included her. After all, she was wearing a team jersey, right?  Until she went running out to join the action, I had no idea that she thought she should play if she dressed in a uniform.  I'll have to remember that the next time she dresses for a game!

She did get a little basketball action after the game though....... 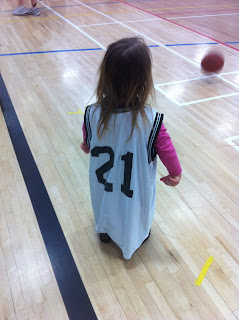