I Love This Quote!

A friend posted this quote on FaceBook the other day:


Henry Ford's name was a common one in our household growing up.  My Dad - K's Grandpa loves old vehicles & K has had the chance to ride in the rumble seat of Grandpa's favorite car occasionally. I had not heard this quote until recently, but I think there is so much truth in it.  If we don't realize that something is not doable, then we just might try to do it & will often see great success. 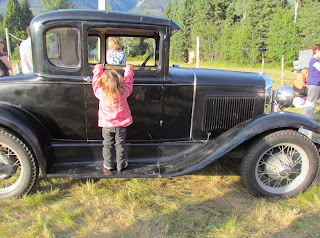 K & Grandpa's Model A
When we first started doing early learning activities as well as a neurodevelopmental program with K, I often thought it would have been great if I had gone to school in the early childhood education or some sort of therapy field.  I often found myself wondering in what direction to go, or trying to figure out what was the next step in development that I should be working on - & I still do sometimes. I do figure out where to go next, but I know it requires a lot more research than it would for someone with some background in this area.    We started K's ICAN program about a year ago & that helps a lot as most of it is all set out for me now, however, I still find that I have to be creative & look for new ideas in order to keep her excited & interested...................so I'm still floundering at times:), but although I don't always know which exact step to take next, I always seem to find more than enough activities to keep K busy & learning.
.....................and lately................... I am starting to appreciate my lack of understanding! If I had all of that knowledge, would I have also had the perception that my daughter could not do A, because kids with DS don't learn to do A until a certain age, or even that typical kids don't learn to do B until they are _____ years of age?  Would it have held me back from trying some of the things that we have taught K at such an early age?   Certainly, I never would have thought to teach my baby to read right? I will never know the answer to those questions, but I believe that things happen for a reason & I am exactly where I need to be in this journey of life right now - for myself & my family.
Once we started down the early learning path with K, we have just kept wandering on.   I never considered teaching my older kids geography, yet K knows most of the continents & a number of countries on the map & can read many more.  Last week we decided to teach her how to cut with a knife & my current goal is to teach her to tie her shoes. These are a few examples, but I could go on & on, so, until I know better ;)  on we will go, perhaps with blinders on at times, but always moving forwards!
Posted by Laura at 8:41 PM

Email ThisBlogThis!Share to TwitterShare to FacebookShare to Pinterest
Labels: Down syndrome, inspiration, trisomy 21