This is my version of a Doman brachiation ladder & took a couple of hours total.  It only cost about $ for all of the materials. We mounted it directly to the wall which means that it doesn't take up as much space, was quicker to build & cost less. That's K's loft bed that you see to one side of the ladder.  It is pushed up against the wall now so she does loose about a foot & a half of bedroom space but even in her fairly small room it's not too bad for space.

I took pictures as I built it so I'll post a tutorial soon. 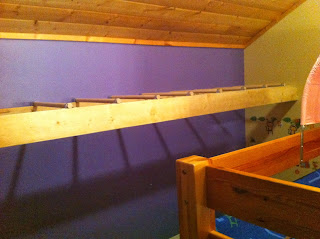