5+ years of program & today is the day. Miss K headed our the door for kindergarten. Registered as a typical student with all the same expectations that come with it.

She was so excited this morning. She rushed through breakfast, took her lunch kit from the fridge & headed for the door a full 1/2, hour before it was time to go. By the time we arrived she was still chomping at the bit & announced that that she was heading to school by herself "Bye Mom!"
Of course I followed her into the school but I allowed her to head out in front & go through her morning routine by herself. She has only been at this school a few times before at her sisters sports activities but did go to the kindergarten orientation this spring so she knew just where to go & what to do. Once inside the classroom she wrote her name & sat down on the carpet, read books & visited with 2 of her preschool buddies until circle time started.  The other moms & I left that point but everything seemed to be going very well.

K was tired but so excited after school & had lots to tell me about her first day at school. According to the classroom aide who I stalked  accidentally bumped into in the grocery store later, K did very well. There was one incident where she refused to do something but when she was asked a 2nd time she immediately complied.

Whew! I know I should expect the best but I still had some nagging worries.

Today seemed like such a big day for so many reasons.  For over 5 years we have worked to foster independence & teach the skills necessary to succeed. It have often felt like I was pushing her to be independent while fighting the urge to hold her back because sometimes I'd like time to stand still & all of my kids to stay little girls.  I know I would have been this way with a typical child in many ways yet I also know that if she were a typical child I'd have worried less & paid less attention to details.  Details like the cute yet easy to get on shoes she wore - my friends typical child has lace up shoes that she needs help with but I really felt that K needed to be able to do this by herself.  Details like the containers in her lunch that she can open herself. She doesn't usually have trouble with this sort of thing but I looked things over just in case. I'd love to let her be my baby much longer but I also know that my role as her Mom is to give her the skills necessary to be independent.

I made sure I kept very busy during the day. One of the other moms & I went for coffee before heading home.  I have a small appointment based business which I run from our farm so I overbooked myself just a little so I'd have to work at full speed all day ;).  It kept my mind off of K & her first day of school although it wasn't as tough as I expected it to be anyways.  As this last year went by & we slowly started approach the new school year I realized just how ready she was & that is one of the main thoughts I had when I did have a moment to ponder during the day.

The other thought I had was "This is it!"  This is one of the big moments we've been preparing for.  All those miles we've jogged & crept & crawled. The thousands of flashcards we've flashed & sentence strips & books we've printed & laminated & read to each other. The hours of digit spans (love them, honest ;) All of the things she learned from her 3 big sister, her Daddy & I.  Today was the day when K was able to go out into the world on her own, make her own decisions & prove to the world that she is a perfectly capable little kindergarten student.

All in all it was a very good first day! 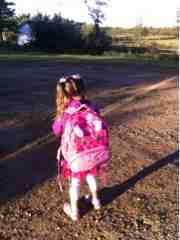