Back to School Thoughts 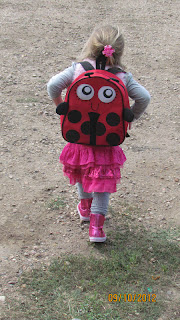 K headed back to school last week. I am having some mixed feeling this year.  She turned 5 about 3 months ago so is eligible for kindergarten but we have decided to wait one more year before starting.

Academically there is no reason for holding her back & it seems strange to me to see many of her little buddies, both in person & online head to kindergarten without her.  However, there are a number of reason for waiting.  Physically she is on the small side & not able to run as quickly as her same age peers.  K's speech is good & improving by the day, but is also not equal to that of most of her peers. I often think she is less mature than many kids her age although after spending a couple of days with her class I had to wonder at times! lol

My husband & I also wrestled with the question of whether or not to hold back one of our older daughters.  This particular daughter was born in mid December.  KJ was the only one of my kids who I wished would have been born 5 or 6 days late rather than a week early - this would have put her birthday in January & solved my concerns by missing the cutoff. I would have even put up with an extra week of  pregnancy - a 8.5 months of morning sickness type of pregnancy!

While looking into the option of holding back KJ, we researched as well as talked to a lot of parents. We talked to a number of parents who regretted sending their kids early but I have yet to talk to a parent who wished they hadn`t held their child back.

I believe that holding KJ back allowed her to be more confident & become a leader within her class.  School work has also come easily to her as it did her big sisters who were both born in the early months of the year.

This article on kindergarten readiness sums up what I feel as well.

My expectation is that K will do everything that her peers will do in school & I feel that giving her one more year to prepare will help her to succeed. Once she starts kindergarten we will not hold her back as we feel it will be best for her to stay with the same bunch of friends that she starts with.

I admit to having another motive for holding K back. Her neurodevelopmental program takes quite a bit of time & by holding K back we will have one more year to concentrate on it.  The program has allowed her to progress much more quickly than any mainstream program so another year will be great.  Of course we will continue to do a neurodevelopmental program when she is in school but once she hits grade 1 it will not be possible to focus nearly the same amount of time on it.

As an added bonus, I get to enjoy having her at home for an extra year:) ..........Yes, it's hard for me to see my baby grow up sometimes even though we have worked with K practically since she was born to prepare her to be independent.

We are so pleased that we are able to offer a preschool in our tiny community. It is organized & run by the parents who hire a teacher & fund raise to be able to keep fees very reasonable, buy toys & supplies etc. The preschool had a bit of a glitch with getting a teachers aide in place for the start of school on Monday so as president & founder of the organization, I was asked to step in as a parent volunteer to help get preschool up & running smoothly.

After being able to spend 2 days in the classroom, I am confident that we made the right choice. My biggest concern at this point is still about K being bored when the other kids are working on academic concepts that are much to easy for K. For example, they did one activity involving placing some little glass stones on letters on the coconut tree from the Chicka Chicka Boom Boom story. K's boredom became evident in her refusal to cooperate partway through the game.  She was eventually persuaded to join in again but wasn't thrilled with the idea.  Next they identified numbers from 1 to 10 & although this is equally simple for her, the fact that they swatted the numbers with a modified fly swatter made it so much fun that she had a blast.

K did well in gym class although she is often the first one to follow when another child is running around out of turn or jumping, playing etc when they aren't supposed to be.  For the vast majority of the time though she is doing well.  The extra year (& probably our summer running program) has made quite a difference in her ability to keep up with the others.  She also quickly understands the games they play & joins in easily.

I even notice little things like the fact that she isn't always the last in line on the way back from the gym as she often was in past years & that she is much more self disciplined about eating her sandwich before her snack at lunch time.

Most importantly she seems to have really overcome her shyness & is playing well with the other kids in her class.  K has spent much more time with older kids & adults & in the past & because of that, has been a little more reserved with kids her own age.  It was wonderful to see her join in when the other kids were playing with horses & to initiate playing dress up.